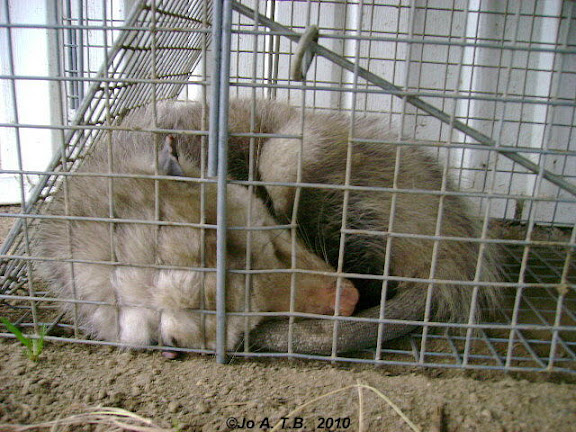 Living out here in the country has many advantages, but also some disadvantages. My husband has a business, and over our long cold Winter he's had some critter guests move in underneath the trailer building. My husband was especially concerned about a skunk who has been spreading his lovely perfume everytime someone walks near the trailer. The skunk smell is literally coming up through the floor inside the building!

So needless to say my honey went out and purchased a humane cage to trap the skunk! He didn't realize that there were also Possums living under there too. So far he's caught a feral cat twice and two possums. The photo above is the second possum he caught, the first one was smaller possibly the spouse or baby to this one! The other critters were caught with food bait, but this guy just wondered in on it's own, maybe smelling it's buddy from the day before!

I approached the cage with caution, and this cute thing was sleeping like a baby. He wasn't even a bit concerned at my presence! He was just so cute sleeping there, I almost wanted to pet him, but didn't dare! 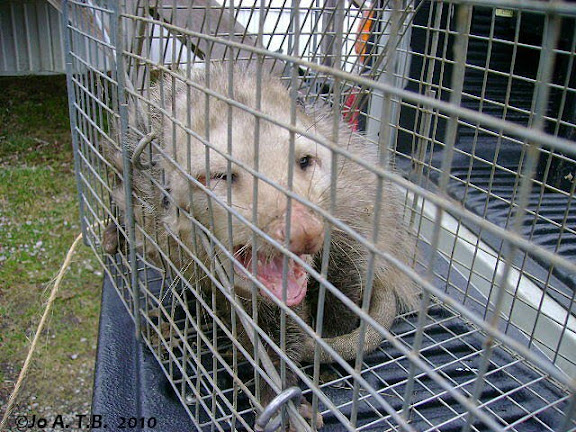 The possum was not at all pleased to be awakened from his deep nap! My husband had tied a rope to the cage to pull the cage out. The possum was growling and hissing not happy to see us at all! I told my husband to release him in the same spot as the other one, just in case they were related!

I'm always putting everything together as lovers, family, kids, even when it comes to animals! The possum was banging his head and nose against the cage, especially when the truck started moving. He bloodied his nose a bit trying to escape! 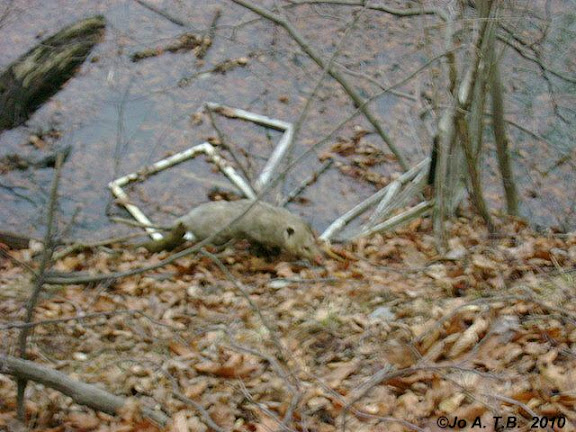 We relocated our big possum buddy in a nice wooded area, where the other one was released the day before. I was very apprehensive to get too close, as these are wild animals and you never know what they'll do. At least he was free and not a nuisance to our close home area! Still no sign of that dang skunk, but you can sure smell him! I've since quit feeding the feral cats near my home, because I don't want to attract other wild animals! 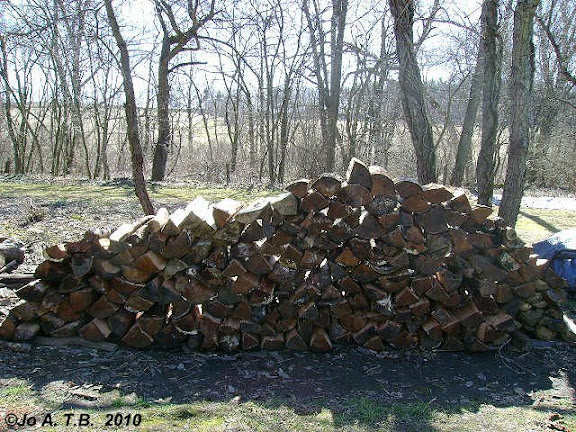 On another note the weather has finally broken here in Pennslyvania. The big snowmelt, and rain of last week is but a memory. A chance to dry out we're having the most beautiful early Spring weather after the hardest of Winters in many years. As I said we ran out of wood, and had an electric bill of $240.00 last month. I know my sister paid over $600.00 for her electric bill this cold Winter! We cut a lot of wood last Fall, but ran out due to the coldest of Winters. I was pissed that we had other logs, but they were buried under over 20 feet of snow!

So now we've a break in the Weather I've been bugging my husband to cut some wood. Above is the first pile I stacked today. The sun feels wonderful and it's a great way to work off some Winter weight! At least we'll have some ready to burn, in case the weather turns cold once again. I wouldn't put it past this global warming!

One last note, I've been following the Tiger Ranch story for almost two years now. Yesterday Linda Bruno was back in court again. with allegations that she violated terms of her probation. Just when you think it's over, the saga continues on! They were saying that the Defend Tiger Ranch site was soliciting for cat litter, and T-shirts. The website was taken down as of last night!

Linda Bruno is to have no contact with animals, and is said to still have two horses and not paid any of her restitution. Her lawyers say Linda wasn't aware of any wrong doing. There's still much controversy for and against this case. I'm still receiving comments on my Tiger Ranch posts from the past, read all the controversial comments and my Tiger Ranch posts!

It was just yesterday that I decided to channel surf and came upon this guy who removes wild animals from people's homes. I forget the name but it is on A&E and he caught a raccoon who was hissing and was just so vicious. He also let it go into the wilds. I don't no why but I kinda like them because they remind me of Simba. I miss Simba so very much and I always start to cry when I think about him!
Jo, from now on I am always going to link to you at the very top of all my posts, so if I do forget, please remind me!
You always have the most beautiful photographs!

Sorry you're having problems with my blog. I must report the problem! Your comments are showing up here, but just not in the total on my posts! Don't even mention racoons, we probrably have them living at the business also! I know how you feel I still miss all my animals Delilah dog and Bonescat. They sure get under your skin and way into your heart! How sweet of you to link to me, you know I feel the same about your beautiful photographs too! xoxo

Catching stray cats for operation catnip we caught one particualry large Tom. He was so friggin wild when we deliverd him to the vet school for his "fixin'" they had to put his cage in a room all by itself. When we got him back for release it looked like someone had taken a cheese grater to his head (well, not quite that bad but close). After we released him we never saw him again.
Certainly hope he was alright.

I sometimes forget they are wild, thinking I've some magic powers to make them tame! I can imagine your Tom Cat wild and crazy. Reminds me when I had my Labs fixed, after they woke up from surgery, they were pissed and barked like crazy. My vet called me up on two separate occasions, for my Male and Female saying "Please Mrs. Burkholder pick up your dog they're giving me a headache!" In the backround I could hear my dog barking nostop! My poor Vet!

My backyard has always had cats,possoms and mice. The mice I didnt care for, so far they have been the only ones who made it indise.

Wow! Possum?! I never saw it in the wild! I once saw a raccoon (in Connecticut) eating food from garbage can and that was scarly...

Here there are many crows. Also cockroaches...

Anyway, nice tulip! Did they bloom already in your garden?!

Wow Terry you think the cats would be chasing the mice! Just as long as they keep their distance!

We've got it all here, big black crows, the hawks are back to roost, and cockroaches live in our log piles!

The tulips were my Valentine tulips I shot with the big snow backround! My daffodils have bloomed! My tulips are coming! :)

I got an award for you. Do visit my blog

Jo, what are your plans if you do catch your stinky interloper?

Hopefully we'll let him go, he's been an illusive fellow!