An Autumn Drive In PA! 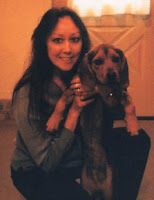 We headed back up to the mountain in my husband's dodge panel truck over the weekend. An Autumn drive close to the Laurel Mountains. Visited with my brother-in-law, and of course we were anxious to see how Snoopy dog was doing. Snoopy was my father-in-laws dog, he passed away almost two years ago. Snoopy was only a year old when he died, and a stunning full blooded beagle. We were so in love with him, and kept him many times when my father-in-law was hospitalized. I would often walk Snoopy with Delilah in the woods. He had those long ears, much like the basset hounds I always loved! He had perfect markings, black, brown, and tan. Snoopy also had the high pitched hunting dog howl, especially when he was on a rabbit. The photo to the left taken 3 years ago of Snooy and I. We wanted to keep Snoopy so badly, but he kept jumping on Delilah's back. So we decided it would be best to let him go to my brother-in-law. He is free to run on secluded property, and is living the high life with his new owner. I kissed him madly when I saw him. He's a very happy beagle chasing everything in the woods! Snoopy was elated to see us too!

We left my brother-in-laws house, and started down the mountain. Took some shots right out the front windshield while in motion, because I thought the trees were so gorgeous. The shot above in my header was taken on our way down the mountain. It looks as if the trees go endlessly on! We were hoping to go hiking on the Laurel Highlands Hiking Trail , but the panel truck was running badly when we were on the mountain. We were leaving a cloud of exhaust behind us, so we decided to head homeward bound. Even though our trip was cut short, I still came home with some treasures. My brother-in-law gave me some hot peppers, and fresh grapes from the grapevines he had!

Two days of hard frost over the weekend, killed mostly everything around our area. I didn't bother to cover my flowers. They were pretty much done in, except for my roses, and petunias. I felt it was time to let go of my Summer beauty, and get on with Fall festivities. I'm sure going to miss Summer, it's only been in the upper 40's for highs. Back to jeans, coats, gloves, and hats. Soon the white stuff will be blowing, and I'm already missing the carefree, warm days of Summer!
Posted by Jo A. T.B. at 10/22/2008 10:37:00 PM

I thought this pic is your daughter!!! You are very young and cute :)

How cute Snoopy is! Oh she jumped on Delilah's back?!

This autumn trees are amazing! Very nice picture!!! I love it!!!

I remember you said you want to see our autumn trees in Japan. I should go Kyoto someday to show you some pics. (Of course you can search the net, though.) Kyoto is a nice place to see autumn leaves. Temples stand out against them.

Beautiful color, and a wonderful story about Snoopy (chasing things in the woods...as any happy beagle would do!!)

You looked really pretty.Firstly,I thought was your daughter too like what Ochi thought.

The autumn pic really nice and felt comfortable.Wish that Malaysia have this weather too...But this will never happen.

You should take more pic..I would love to see it...

Thank you, the past couple years have aged me some. Death and sadness wears away at your your outer beauty. I thought Snoopy so cute too. He was much like the Snoopy on the Charlie Brown cartoon!

Glad you liked the picture, I wanted to put up an Autumn one. I would love to see some Autumn photos of Japan, I sure they are stunning!

Thank you, I'm glad you liked Snoopy's story. Yes he is a much happy beagle, with the attitude of
the real peanuts dog Snoopy in Charlie Brown, in which he was named. :)

Thank you! My daughter is so very beautiful, much like you in your youth. I'm aging gracefully, as most oriental folk do, but feeling in my body the age!

I'll take more photos to show you! Will you take some of your Malasia too, would love to see them! :)

Beautiful picture of the Fall trees. You know Jo, you would love my part of the world. I go hiking almost every week-end. The trails here are picturesque!

I have an award for you, because I know that you are a chocoholic!

Love the picture taken from the passenger seat (I hope!). The leaves are lovely.

Great picture of you with Snoopy. I know he was glad to see you!

One of these days I am going to get to walk Molly again (husband has been the only one walking her in the evenings). Getting back in the groove of work, house, meals, bills, etc. has really been difficult, but I do like my job.

My one dog, Rosie, is part beagle. It is such a wonderful breed. Love the pic, those beautiful PA roads!

I love this picture of you and Snoopy! Nice post, Jo.

Nazarina I'm sure I would like your area too. I enjoy remote and wide open places. I also like walking different trails.

You know me well, I will display the award with pride! :)

The photo was taken from the passenger seat. Thanks I just love Snoopy, he's such a cutie.

It's really hard to juggle all your tasks at once in a short period of time. I didn't get a chance to walk Delilah tonight either. It's dark too early!

Yes the beagle is a very happy breed. Thanks glad you liked the picture, yes we do have beautiful roads when they're not under construction!!!

Thank you Joyce, isn't Snoopy just so cute! I wish we could've kept him.

You got that right about the construction!

We aught to know! We're living in the middle of it constantly Jo!