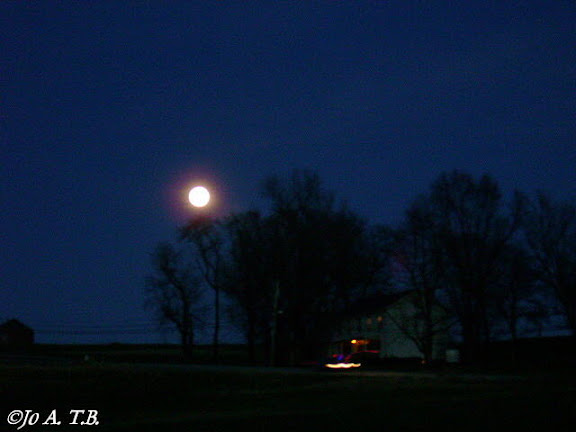 As we've done in the past I walked my sister's dog this 1st of December evening in the full moonlight. I shot the photo above at twilight just before the sky turned black and as it was just starting to rise in the sky! The night was clear and she sure was a beauty to behold!

The moon in December is called the Full Cold Moon, when the nights are the longest and darkest! Decembers moon is also called the Full Long Nights Moon meaning the moon appears in the sky for a long period of time.

Since darkness arrives so early, we often walk in the dark. Tonight the farmfields were lit by the glow, and the moon provided much light to the back roads we walk on.

Hunters have been out in full force here the past two days scouring the woods for deer hunting. Many deer have met their fate on our local roads especially in the last month.

The holiday spirit is coming alive with folks putting out their Christmas displays and lights over Thanksgiving weekend! The brisk air makes me feel like Winter is fast approaching! A full moon can bring out the romantic in anyone!

How was your thanksgiving holiday?! I hope you enjoyed!!!

Beautiful full moonlight! Yesterday we saw the full moonlight in Japan, too. I saw on TV that it was the last full moon we see this year!!!

The flu is now raging throughout Japan! I hate to go to crowded places.

Very nice holiday Ochi! I cooked until midnight the night before!

I'm not sure if this was the last full moon of the year!

You may be best to stay out of crowds since the flu is going around there! Easier said then done huh! Take care too!

This is just another one of your beautiful photos!You are such a pro with that camera!
Jo, I am freezing my you-know-what off over here!!! Brrrrr! I had frost bite on the slopes last week-end!
How is work treating you? I see that you had plenty to do Thanksgiving!!!!
I need a big break from my kitchen LOL! I always talk about you, I tell my friends that you are the ultimate defender of the four legged kind!

Thank you Naz, I've such a passion for photography too!

Today was exceptionally cold especially this morning! I couldn't walk my sister's dog too far last night, my hands were froze as we walked a block. The wind has been kicking up!

I bet you need a break from cooking and baking, but if you're like me you eat mostly at home! :)

Yes I'm very proud to stand up for furry critters!