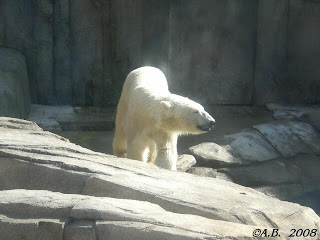 The Polar Bear has been listed as a threatened species, and these magnificent giants may disappear in the future. Their habitat disintegrating and damaged by devasting effects of global warming. Although we are trying to drill our own oil here in the U.S., the drilling could impact areas inhabited by polar bears. Let alone the oil from an oil spill getting into their fur, blocking their natural insulation from the cold artic air.

Threatened under the Endangered Species Act means the polar bear could become endangered and extinct if their habitat is not immediately protected! The disappearing ice has caused feeding and breeding problems, along with drownings from long distance swimming and have been reportedly resorting to cannibalism.

Can we afford to allow their eventual decline to happen? Sadly future generations may never get to view the stunning Polar Bear. The Polar Bear photo above taken by my daughter last Spring at the Pittsburgh Zoo. Is this what it’s come down to, locked in a controlled environment, than to be free in their own natural wild habitat?

Mass areas of the Arctic are literally melting away before our eyes. I found astounding photos of how Arctic ice has deteriorated over the past decade. Huge glaciers and snow caps are receding and dissipating further inland. Lack of ice contributes to early Spring runnoff, and considerably less water melting in Summer for irrigation, drinking water for animals, and sustainable water for marine life!

Close to twenty species have been recommended by Scientists as in danger of becoming extinct, you can find the list here in The Center for Biological Diverstity. Scrool down and click on species. I was amazed that honeybees are not on the list, but I see that the list is mostly comprised of marine wildlife!

I found a eye opening video about disappearing species on You Tube: Call Of Life ~ Facing The Mass Extinction!

We need to think seriously about the ever fading species around us, for our very existence thrives on their future survival. Let's all join the movement of ongoing awareness and global preservation!
Posted by Jo A. T.B. at 1/06/2009 02:23:00 PM

I hear ya! Thanks for an informative article.

Thank you Jo for stoppin by! Stay warm and cozy!

Your posts are always important! Thank you!!!
I sometimes think we are not seeing how global warming is affecting many stuff.
This winter is very warm in Japan. Not having snow yet!
I know we should pay more attention to our nature to survive, but we human beings act from self-interest nowadays..., many sad news follow... which is too bad :(
I hope someone who know the real truth would do something so that we could freed from the threat of annihilation...

We haven't had much snow here either, but we're expecting to get some today and tomorrow!

I saw a documentary on the melting Artic, and I thought of it's importance. Global warming is a worldwide problem we all need to think seriously about!

Wow! Same here, too!
I just checked the weather and found that we are expecting to get some snow tomorrow.

Your post is always educational ;) You show me what I don't see.

We're expecting a snow storm tomorrow! You stay warm too! I'm glad you liked the post! :)

I love the pics! This was a great post.

I HOPE somebody brought Luke the Coonhound home, with love....

Nice to have you drop by my place again--glad your holidays were good ones!

I hope someone gets Luke too Joyce, he's a cutie. He reminds me of my first dog, he was a coonhound mix. Sadly I found one of the dogs I featured here in the memoriam section, her name was Keely. I wish I could save every one of them! I can only try to bring more attention to their dire plight!